A sweet friend suggested that she was going to try one new recipe every week this year. What a brilliant resolution! I have got an evernote account FULL of recipes I’ve snipped out over the years, and really would like to cook more at home. I’ll give it a go too. 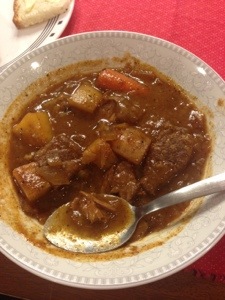 I worked at home yesterday so had a chance to make this Beef Stew, from Real Simple. It goes in a slow cooker but it is not at all like the slow cooker stews I made when I was a kid – those involved chucking everything in and turning it on, this one requires browning and deglasing. It IS delicious. The boys loved it (though Thirteen carefully ate around all of the diced onions, and really seemed to enjoy most of all the latitude to put as much bread in his body as he could).

Note for the recipe – I wouldn’t recommend following the proportions. I used 1/2 the meat, and it was entirely satisfactory. Any more and it wouldn’t have fit in my 4-Qt slow-cooker. I don’t usually have baby carrots in the house but we did from our recent car trip to Ohio and back, and I was happy to chuck those monstrosities into dinner as well.

And here is my beef (oh geez, entirely unintentional!) with slow cookers – they are really no good if you work away from the home. I want something I can chuck food into and cook and when I come home it’s all set – but almost all recipes seem to say “6-8 hours on low or 4 hours on high.” I work an eight hour (at least!) day and it takes me another hour or so to get to and from work. I can’t just leave that cooking all day long. Therefore, slow cooker use is restricted to those times I’m at home and can start it up at my leisure, letting it work hard behind the scenes while I’m nearby and ready to shut it off before dinner time.