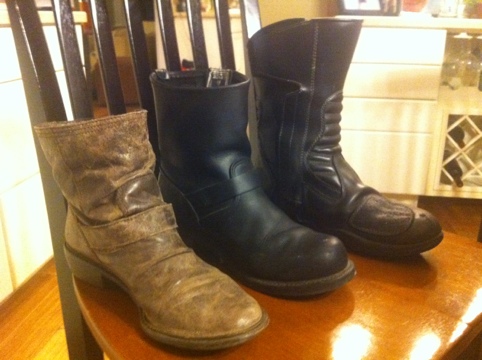 I’ve been acquiring a lot of boots lately. The thing that really strikes me is the different uses that people think boots should have – and that the companies that sell them want to make you think they’re good for.

For example – the boots on the left are MIA “motorcycle” boots. The leather is so soft and distressed, and I’ve worn holes in the heels after just a year of wearing them to walk around – think of how they would hold up at stops on a motorcycle! The boots in the middle are Frye  Engineer boots, graciously gifted to me by a friend who didn’t quite fit into them – they are great, and I would be tempted to wear them on the motorcycle. Except! The ones on the right are actual motorcycle boots (the Tourmaster Solutions), and they have ankle protection and a  shifting pad on the left toe so the tops don’t get hopelessly scuffed up. Plus they’re honest-to-goodness waterproof. After riding around in boots that really do protect your whole foot and ankle it’s hard to go back a reduced level of protection – no matter how goofy your feet look in the motorcycle boots.

Of the three boots the REAL motorcycle boots were also the most inexpensive, hilariously. Who knew it was so expensive to look like a motorcyclist, and still be so poorly protected?