Still no power. The neighborhood behind out house does, though, which is just rude! My new comfort temp range is 53-57degF indoors. # Powered by Twitter Tools

Aaaah snow! Halloween party is off, but we are still going to make and eat all of the party foods. http://t.co/q0MMzoPW # Power is out! We are entertained by intermittent transformer fires down on the corner. Little dudes tucked in … Continue reading →

Ugh, after nearly 2 hrs of bleeding/priming the line /pump, still nothing. We are off to our cold bed. Hopefully we can fix it tomorrow! # dorkiest night: I ID an axes error on @goodreads graph analyzing pub date of … Continue reading →

More furnace surgery tonight. This is NOT the kind of stuff you want to blow out of your fuel oil line. http://t.co/hU9sotd0 # Powered by Twitter Tools

When I first had morning coffee with Mike – the very first time – he bashfully served me from some Nestlé globe cups. He has two, and he’d bought them in the early 90s at a flea market. He would have bought more but he didn’t have the cash.

The bashful grown man showing off this special thing to me so shyly when we were still getting to know each other was incredibly endearing (*cough* and attractive!).

Tonight we were at Goodwill and I found him in the dishes aisle. He’d found a whole bunch of those mugs, and was kind of staring at them in wistful disbelief. “Do you want them” I asked? And we got a basket post haste and filled it up. 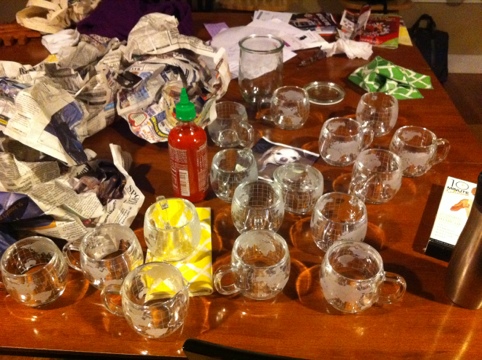 Now we have a set of 14! And we even found a sugar and creamer. Amazing! 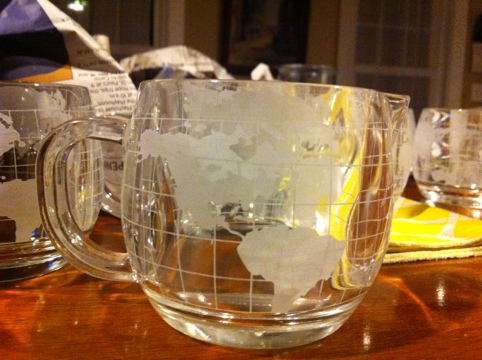 karinajean: hey if I retire at age 62 I will qualify for $x,xxx/mo social security benefits.

Mike: I’m somewhere in there too, we should be ok, with the paid-for house, tax discount, massive garden, chickens, goats and cow.

karinajean: all we need cash money for is to pay dem durn revenuers. we can make, grow, and steal everything else we need, sweetheart! 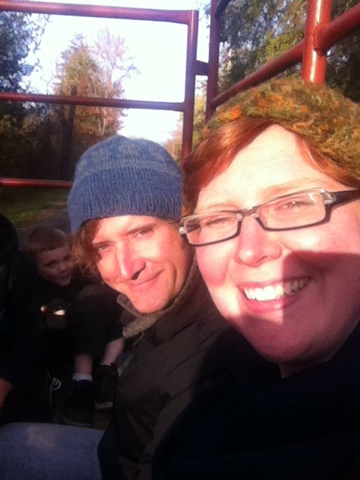 I’ve been on a huge knitting kick lately. I love to use ravelry – it makes it so easy to keep track of your yarn and the patterns you’ve intended to use it for. People used to (and many still do!) make a copy of the pattern and put it in a bag with the yarn and store it neatly somewhere until they’re ready to begin work on it… but I have never been that organized, and I hate using a bunch of ziploc bags if I don’t strictly have to.

Here’s a terrible screen-shot of all the yarn in my stash: I downloaded an excel spreadsheet and added up all the yarn I have – starting quantities and what I currently have, after knitting a bunch over the last year or so.

Even though my queue has a list of 24 patterns in it that’s already matched with yarn, even though there’s a bunch of yarn not currently matched to ANYTHING, and even though I will roughly NEVER finish that list of “to-knits” up, this makes me feel accomplished and excited.

oh, PANTS. I was sure @mikegrundy and I could fix the furnace but the line must be clogged. we changed the filter but the pump won't draw! # We couldn't turn on the heat tonight (bc it's BROKEN) but really, … Continue reading →

I got to my 8am mtg 1 full hour early. When you live 80 miles away I guess that's how it goes sometimes. #StarbucksIsAFeeBasedPark # And! Just arrived at my office. I woke up at 4AM, y'all. This msg has … Continue reading →

Starbucks is the new public park

I had a meeting in NYC today at the historic Cooper Union foundation building. We live so far away – 80 miles! And it’s always a negotiation to get to or from a meeting. Like today: I left the house and drove to Secaucus Junction train station where I could park and take the train in. Other times I’ve driven to Ramsey Rt 17, which is near my work, but the return train schedule is far less frequent so I was concerned I wouldn’t get a train back to work in time for a noontime meeting.

Wouldn’t you know it, but I got to the east village by 7AM, a whole hour early for my meeting? 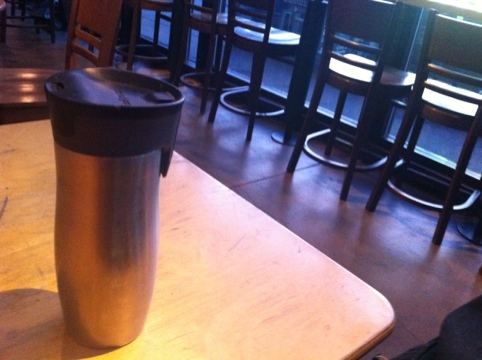 So I got a $5 coffee drink at Starbucks and sat for an hour like any self-respecting new yorker. After all, Starbucks are practically public places now, y’know? Like a park with an entrance fee. So classy. It’s been lovely weather at youth football games so far this year. Sunny, not too cold, and I’ve been able to sit and knit on things happily. This week I worked on a Monarch Lace Shawl (for a gift for xmas, so don’t spread it around!) and got 5 inches done. It was kind of a stressful game, so I was happy to have something else to focus on while Eight’s team tried to secure their place in the playoffs against an undefeated foe. (They did NOT, but they played very well and had a good time.)

Next weekend it will be colder, but still sunny. I think that will be Eight’s last game of the season. Not bad this year – we’ve had amazing weather for all of his games.

The knitting this fall has been awesome. I’ve finished two things already and feel like I’m in a great place for my holiday gifting (i.e., all the yarn is in hand and gift patterns are selected).

One of the things that makes fatigue after late night in NYC worth it: discount bread fm Panya. http://t.co/InvCNXgN # This has been a really bad week for traffic on the thruway. #yesIAmParkedOnTheHighway # Just learned that the Orange Co … Continue reading → 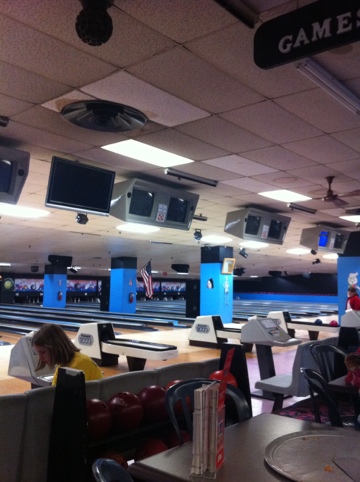 Oh hey, I finished my hat today in our staff meeting! http://t.co/GuV8GBVK # YES! RT @dlightful: when I hear..about Herman Cain, I'm offended someone thought Godfather's Pizza was a good biz name. #racist #stereotype # Had a heart to heart … Continue reading →

W. Eight at a party and it's "1 of these moms is not like the others" You guess who has short hair, skirt, knee socks, cons, and knitting… # Powered by Twitter Tools

Oh hey, I got some yarn for a sweater! #sheepandwool #rheinbeck http://t.co/Hdjmn6oM # Powered by Twitter Tools

Ugh I am having one of those mornings where every single yarn needle I own has disappeared! #latetowork #thisiswhyIneverfinishprojects # Powered by Twitter Tools

RT @feministhulk: DEAR COLUMBUS, TAKING OVER ANOTHER PERSON'S HOME: NOT "DISCOVERY," BUT TRESPASSING. SINCERELY, HULK # We decided to see if we can bribe the boys w new furniture to clean their room – they get 2wks or it's mine! … Continue reading →

There's a HUGE difference btwn the 48degF at home (hands get cold in 30min, muscles tighten) and 61degF at work (SO WARM) when motorcycling! # I had a hilarious convo with Twelve last night about why Columbus is relevant. Hint: … Continue reading →