The problem with my ego.

First things first, Iâ€™m totally a knitting fiend when it comes to making myself mittens! I mean, check it out: 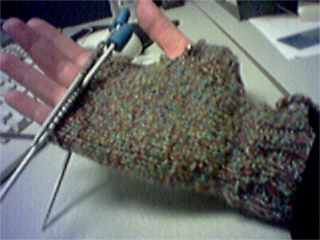 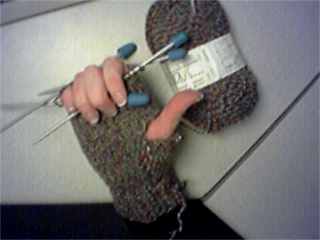 Almost done with the first one, and then itâ€™s on to the second! If only I could spend more time working on these, and not working on work.

Right, so, speaking of work, I nearly got into two fights with El Bosso today at work.

Well, the first one wasnâ€™t really a fight, so much as it was a narrowly avoided pissing contest. This morning I mentioned to El B. that someone wasnâ€™t in yet today b/c she had errands to run. He fussed that we had deadlines, and he had errands to run too and heâ€™d been putting them off. I pointed out our deadline was MONDAY, and weâ€™d all postponed our lives until after that deadline. Also, speaking of deadlines, I said, I have a doctors appointment tomorrow AM and wonâ€™t be in until mid-morning. He fussed that heâ€™d been putting his doctors off for 3 months. I bit my tongue. I mean, my doctorâ€™s appointment could have been about something terrible! I could have been going in for a biopsy, or a CAT scan, or an MRI, or to find out if that lump really is cancer or not! (Donâ€™t worry Mom, itâ€™s just a check-up! Everything is just a-ok.) And itâ€™s none of his business. Itâ€™s none of my business that he doesnâ€™t go to the doctor.

This afternoon was a really weird â€˜confrontation.â€™ We just got our 1st of 7 fully completed and reproduced volumes back from the printer: 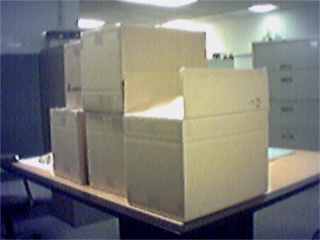 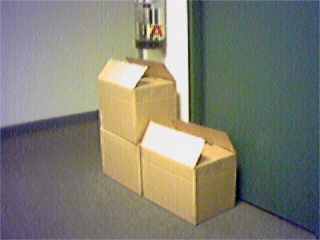 Thereâ€™s a streak down some of the covers, and El B. is totally fixated on it. He keeps trying to get rid of it. But he thought I was INSULTING him for saying we shouldn’t ‘play around with different printers’ trying to get the right color/print quality when we know we can just get the preferred color printer serviced instead. He was really insulted. We all thought he was kidding when he called me on it, and then I noticed this weird look on his face that Iâ€™ve never seen before and realized he was serious and also angry, and so I interrupted what ever he was saying and said “I wasn’t trying to insult you…” and he said “well that was a really insulting thing to say.”

I could make a list of things he says that I find really insulting. But Iâ€™m not going to. Thatâ€™s a whole â€˜nother pissing contest. And I think Iâ€™ve done enough bitching on this site to last nearly 2 weeks, at least. I will list the reasons why he might be hating me right now instead:

Heâ€™s never been able to break my cool demeanor. He can see through my thinly veiled distrust of his management methods. Heâ€™s found this website. He doesnâ€™t like the way I keep interrupting him to tell him things Iâ€™ve already told him that he hasnâ€™t heard lately. I worked more hours than he did this weekend. Heâ€™s just really tired, and acting out. Heâ€™s jealous of my long luxurious hair. He doesnâ€™t know why I donâ€™t try to walk as fast as he does any more. He is really stressed out, and sees me as a â€œsafe zone.â€ I did a bad job on the table of contents last night. He wishes he could knit, but doesnâ€™t know how to ask me to show himâ€¦

So, my ego wants me to tell him all of these things that have been rankling around in my head. About management. About my feelings. About the insults of micromanagement. But my head knows that I donâ€™t need to say these things if Iâ€™m leaving. That itâ€™s not really enabling a codependent, itâ€™s just sticking it out until I get things figured out. Makes sense, right? The problem with my ego is that it wants me to tell him off, feel vindicated, and ride off on my white horse. But Iâ€™d just feel bad for acting unprofessionally. Iâ€™d feel bad for hurting feelings. Iâ€™d feel bad for shooting my own feet. And I donâ€™t have a horse! Too many shades of gray, too many bridges to cross without burning. Stupid Ego.

This entry was posted in all posts, jobby job job. Bookmark the permalink.
Logging In...